During LGBT history month ,Year 4 were very lucky to take part in a rugby workshop ran by our Chair of Governors and ex county rugby coach Mr. Jones. Mr Jones came to talk to the children about rugby icon and legend Gareth Thomas. Mr Jones talked to the children about how important the sport rugby is in Wales and what amazing influences Gareth Thomas had; holding the record for the longest run up to a try and for being Wales’s Leading try scorer until only recently. The children learnt that whilst playing Gareth Thomas came out as being gay and was the first professional rugby player to do so. As a result he worked very closely with child line and was voted Hero of the Year.

The children listened intently and came up with superb words to describe Gareth Thomas ; influential, brave, talented, heroic and legendary. They then had a go at playing the sport themselves. They were brilliant and Mr Jones definitely spotted some future stars.

A huge thank you to Mr. Jones for coming to talk to us. Year 4 have a message for Wales for the rest of the Six Nations… “If at first you don’t succeed, TRY,TRY again!” 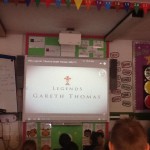 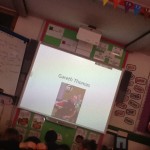 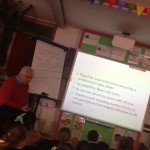 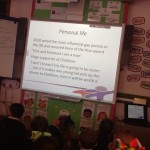 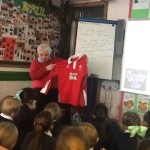 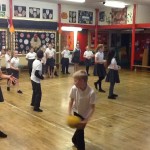 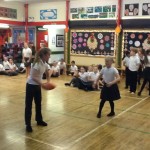 This entry was posted in School. Bookmark the permalink.